They’ll grow in the wild. Regardless of the situation, you’ve probably encountered a mushroom or two in your life. And, upon doing so, your first and immediate reaction was to get rid of the mushrooms. So, are mushrooms decomposers?

Mushrooms are considered a decomposer, and a decomposer is nothing more than nature’s elite cleanup crew. The only major difference is that when the mushroom cleans up a specific area, it rejuvenates it.

Rejuvenates it with essential nutrients that will be utilized by other plants as well as the soil around the site. Sounds pretty beneficial, right? You bet it is!

The first thing that you need to know and understand is that the mushroom is what is considered a decomposer. You might have a general idea of what this term means if you are familiar with composting and decomposition.

However, it is a term that is used a little bit differently in this instance. When someone says that a mushroom is a decomposer, they mean that the mushroom is a fungus that feeds on and breaks down dead plant and animal matter.

Say a mole or groundhog gets into your garden dies or leaves you a big old pile of scat.

All of these things would comprise the integrity of your soil and plants. This is where the mushroom comes in handy.

It would be able to essentially feed on the scat or the dead carcass, eliminating the threat from the garden. Not does the mushroom feeding on the animal matter eliminate the threat, but it actually helps the soil and other plants. 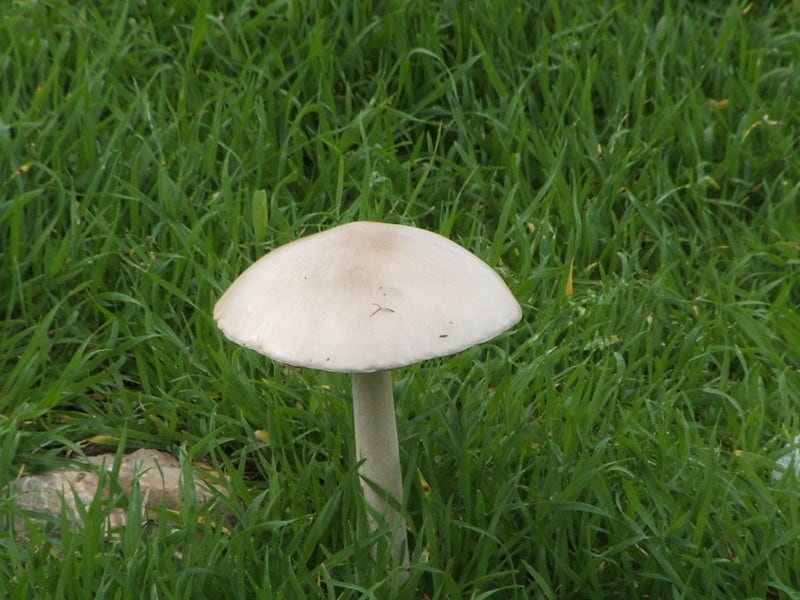 You’ve been cooped up inside for the past couple of days due to unexpected rain. Hadn’t been able to get out in the garden much. Well, the next time you step out to enjoy the sunny weather, you’ll likely notice that your yard and garden will be overrun with mushrooms.

Mushrooms won’t grow from out of the ground until the temperature and moisture conditions are just right. The days of rain likely made your environment ripe for mushroom growth.

What’s even more impressive or may be irritating for some is that these new mushrooms are only going to release more spores that will eventually travel into the ground and create a whole new mycelium network that will also eventually cause more mushrooms to sprout.

Think of mycelium as a complicated root system for the mushroom. The ideal sprouting conditions for mushrooms are when there’s a combination of a high level of shade or cloudy weather, moisture, and high levels of organic matter in the soil.

When all three of these things are present, the mycelium network will cause mushrooms to sprout of the ground.

What The Mushroom Does When Above Ground

As soon as the mushroom comes out of the ground, it will begin to disperse its own spores. These spores will then release what is known as hyphae to seek out the decaying organic matter. This is what makes the mushroom a decomposer.

However, it is a much different one than others because it can penetrate deeper into harder materials like wood. This is when the fungi will start extracting enzymes from the material and kick off the decomposition process.

Bacteria and other known decomposers only have the ability to break down the surface layer of materials. This is not entirely the case with mushrooms.

In fact, one of the only living things capable of breaking down lignin is mushrooms. Lignin is the super-tough, super-durable material that protects the cell wall of trees.

If these mushrooms were not there to do this, the plant would permanently be littered dead trees and other potentially harmful substances. Sure, someone could always come along and remove the tree or the stump, but how often do you think this happens?

Especially when a tree falls in one of the remotest locations in the world.

All that aside, this is not the only pertinent function of the mushroom. No, it performs another important duty that most people aren’t entirely aware of.

The mushroom will form symbiotic relationships with common plants known as mycorrhiza. It is even entirely possible for the mycelium network produced by the mushroom to interact and intertwine with the roots of mycorrhiza plants.

This would be an essential growing boost, as it would provide these plants with a constant source of carbohydrates.

These plants would also gain easier access to essential irons and phosphate ions, via that mycelium network of the mushroom.

It has been suggested that over 95 percent of plant species engage in some kind of similar relationship. In fact, there are even some plant species that can’t survive without forming a dependent relationship like this.

The mushroom might seem just like any other traditional fungi. And, your first reaction might be to immediately remove it from your yard or garden. However, you can clearly see that doing so might be a mistake.

It depends on the situation, but there are a variety of viable situations where certain individuals, plants, and areas could greatly benefit from the growth of these fungi.

link to Why Do Mushrooms Grow In Circles

Mushrooms grow in circles for a variety of reasons. One reason is that they are often started from a central point, like a spore or small piece of mycelium. As the mushroom starts to grow, it will...

Mushrooms are one of the most varied and interesting organisms in the natural world. They come in all shapes, sizes, colors, and textures. Some are edible, while others are poisonous. Red...