Whether you’re an experienced forager or new to the world of wild mushrooms, Illinois is a great place to start your hunt. With 13 common varieties of mushrooms, there’s sure to be something for everyone.

Here are a few of the most popular types. 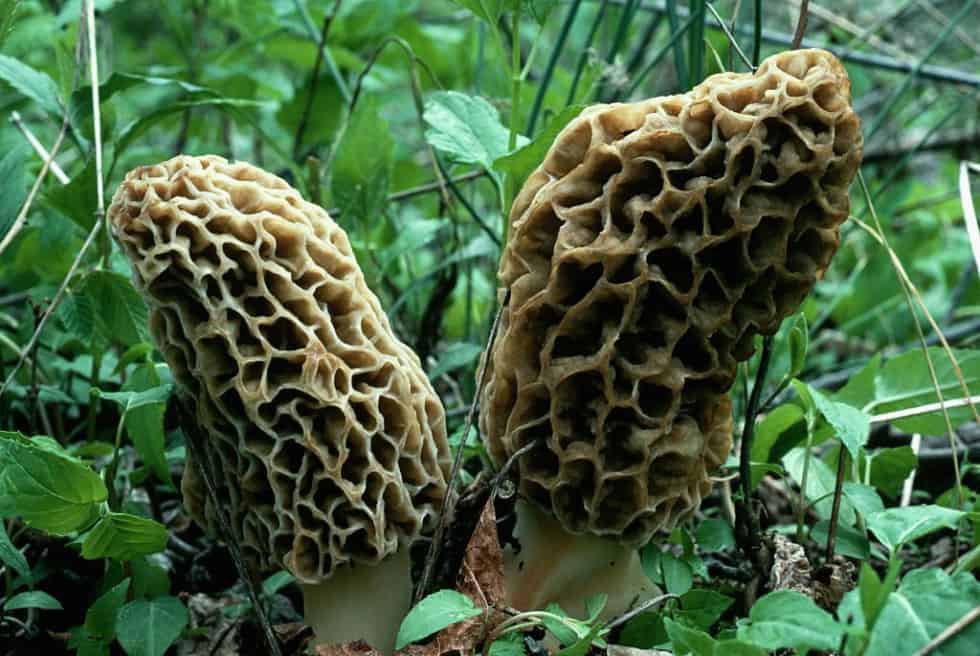 Morels are a type of mushroom that is commonly found in Illinois. These mushrooms have a unique, spongy texture and a nutty flavor that makes them a popular ingredient in many dishes.

Morels can be cooked in a variety of ways, including being sautéed, baked, or fried.

While morels are a delicious addition to any meal, there are also some safety concerns to be aware of before consuming them. Morels contain small amounts of hydrazine, which is a toxic compound.

However, this compound is not harmful unless the morels are consumed in large quantities. Additionally, morels should not be eaten raw because they can cause stomach upset. cook them thoroughly before enjoying.

Overall, morels are a safe and tasty addition to your diet if consumed in moderation. When preparing morels, be sure to cook them thoroughly to avoid any potential stomach issues.

Enjoy these flavorful mushrooms in your next dish!

While the Meadow Mushroom is considered safe to eat, there are some look-alikes that can be poisonous. Be sure to properly identify the mushroom before consuming it. When in doubt, always err on the side of caution and seek professional help.

If you’re looking to add a little flavor to your next meal, consider using Meadow Mushrooms. These mushrooms can be used in a variety of dishes, from soups and stews to omelets and stir-fries.

No matter how you choose to use them, Meadow Mushrooms are sure to please your taste buds!

The Two-Colored Bolete is a common mushroom found in Illinois. This type of mushroom is characterized by its brown and white cap, as well as its white stem.

The Two-Colored Bolete typically grows in groups on the ground near trees. This mushroom is edible, but should be cooked before consumption.

Giant Puffballs are a very common mushroom found in Illinois. They typically grow in woods, fields, and lawns. These mushrooms can get quite large, with some specimens measuring over 20 inches across!

Puffballs are edible when they are young and still white inside. However, once they start to turn brown or yellow on the inside, they are no longer safe to eat.

When cutting open a puffball to check its edibility, be sure to cut it in half vertically. If the inside is white and firm, it is still good to eat. If it is brown or yellow, throw it out!

Puffballs can be cooked in a variety of ways. They can be sauteed, grilled, or even added to soups or stews. When cooking puffballs, be sure to remove the outer skin first.

This skin can be tough and chewy, and is not very pleasant to eat. 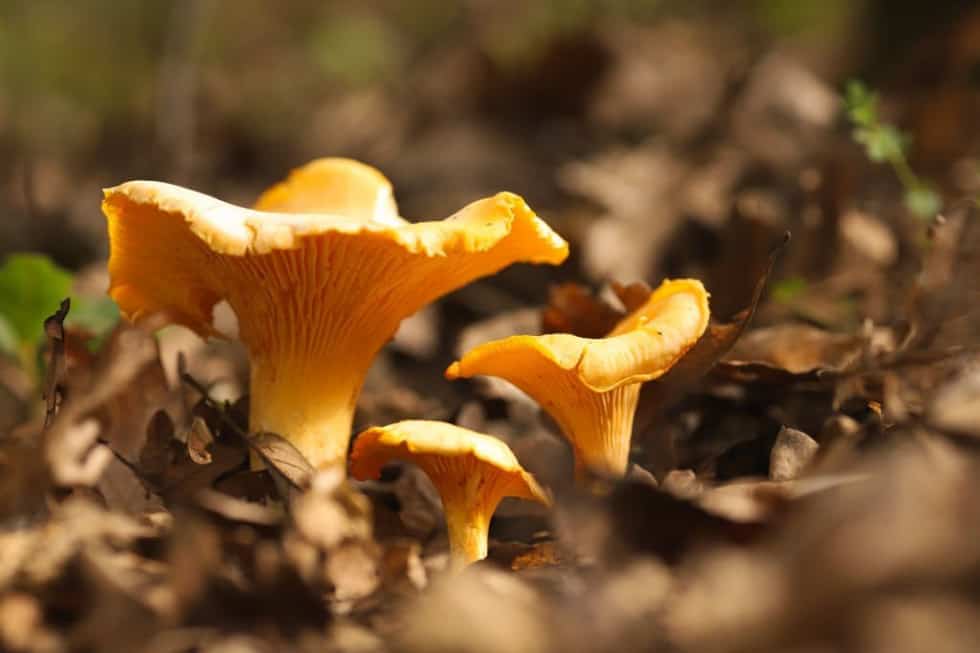 Chanterelles are one of the most common mushrooms found in Illinois. They have a distinct, fruity smell and their caps are usually bright yellow or orange. Chanterelles are a great addition to any dish, but they’re also delicious on their own.

These mushrooms are relatively easy to find, but they can be tricky to identify. Make sure you’re 100% positive that a mushroom is a chanterelle before eating it, as some lookalikes can be poisonous. If you’re unsure, it’s always better to err on the side of caution and leave them be.

Chanterelles are best cooked simply, so they can really shine. Try sauteing them in butter with a little salt and pepper, or roasting them in the oven. No matter how you cook them, enjoy your bounty of chanterelles fresh from Illinois!

Lion’s Mane mushrooms are a common fungi found in Illinois. These white, shaggy mushrooms get their name from their resemblance to a lion’s mane.

Lion’s Mane mushrooms are edible and have a mild, slightly sweet flavor. They can be used in a variety of dishes, including soups, stews, and stir-fries.

These mushrooms are also believed to have medicinal properties. Some studies suggest that Lion’s Mane mushrooms can help boost cognitive function and memory.

They may also help improve joint pain and inflammation. If you’re interested in trying Lion’s Mane mushrooms, you can often find them fresh at your local farmers market or grocery store.

Amanitas are a type of mushroom that is commonly found in Illinois. While they are edible, they can also be poisonous if not prepared properly. Amanitas contain a toxin called amatoxin, which can cause liver damage if consumed.

The best way to prepare Amanitas is to cook them thoroughly. This will help to break down the toxins and make them safe to eat. You can cook Amanitas in a variety of ways, including sauteing, grilling, or baking them.

Be sure to remove the stem before cooking, as this is where the majority of the toxins are found.

If you’re not sure how to identify Amanitas mushrooms, it’s best to err on the side of caution and avoid them altogether. There are many other types of mushrooms that are just as delicious and much safer to eat!

Honey mushrooms typically grow in clusters and can be found growing all year round, although they are most common in the fall.

Honey mushrooms are edible and are often used in soups, stews, and other dishes. However, it is important to note that honey mushrooms can cause gastrointestinal distress if eaten raw or undercooked.

Therefore, it is best to cook them thoroughly before consuming. Honey mushrooms can also be dried and used as an ingredient in many different recipes.

The Shaggy Mane is a common mushroom found in Illinois. This mushroom gets its name from its shaggy, brown cap. The cap of this mushroom is edible, but it can be tough to chew.

The best way to cook the Shaggy Mane is to slice it thin and sauté it. This mushroom can also be dried and used in soups or stews.

There are many poisonous mushrooms in Illinois, and if you’re not careful, you could easily mistake one of these for an edible mushroom. Many people think that all mushrooms are safe to eat, but this is definitely not the case.

Some mushrooms can cause serious illness or even death if ingested, so it’s important to be able to identify the difference between poisonous and non-poisonous varieties. 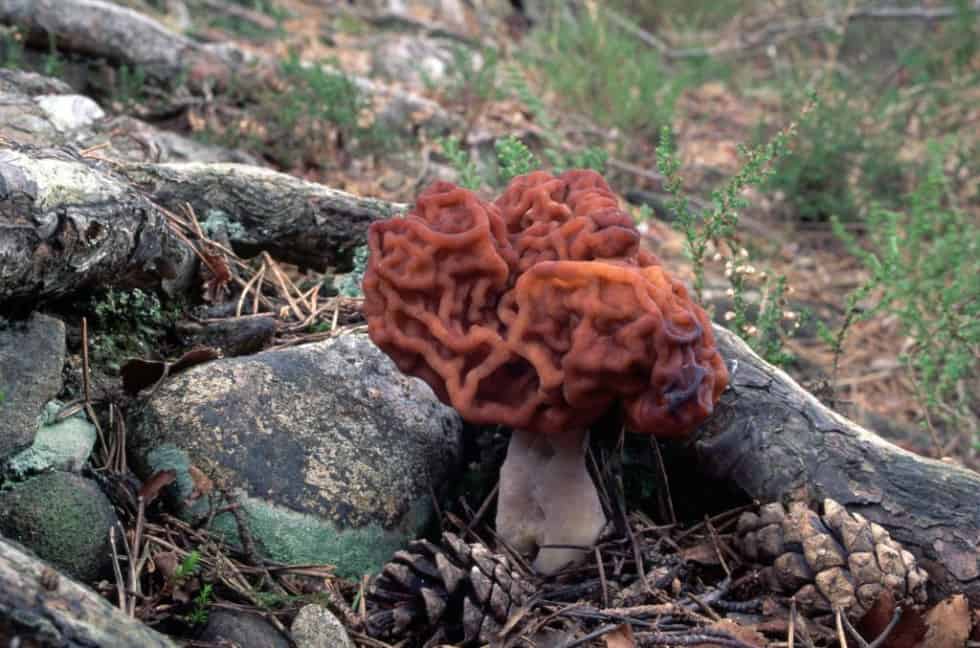 The false morel gets its name from its resemblance to the true morel mushroom. However, there are some key differences between these two types of mushrooms.

Therefore, it is essential to cook this type of mushroom before consuming.

If you are looking for a delicious and unique-tasting mushroom to add to your next meal, consider using false morels! Just be sure to cook them thoroughly first to avoid any ill effects.

One of the most common mushrooms found in Illinois is the Jack O’Lantern mushroom. This type of mushroom is easily recognizable due to its orange color and round shape.

The Jack O’Lantern mushroom is often found in wooded areas and is known to be poisonous to humans.

While the Jack O’Lantern mushroom is not considered to be a very tasty treat, it is often used as decoration due to its bright color. If you choose to use this type of mushroom for decoration, it is important to take care that it does not come into contact with food as it can cause nausea and vomiting if ingested.

The Jack O’Lantern mushroom gets its name from its resemblance to a carved pumpkin. This type of mushroom is also sometimes called the False Lantern Mushroom or the Poison Pumpkin.

No matter what you call it, this mushroom is one that should be avoided due to its poisonous nature.

However, the Galerina mushroom does not contain the psychoactive compounds that make Psilocybe cubensis mushrooms popular among drug users.

In conclusion, there are many different types of mushrooms found in Illinois. Some of these mushrooms are edible, while others are poisonous. It is important to be able to identify the difference between these two types of mushrooms before consuming them.