Lion’s Mane, also known as Hieracium Erinaceus, is a hardwood-loving fungi that are well-known throughout the world. It not only tastes great, but it offers a slew of medicinal benefits.

When you look at everything that it offers, it is easy to understand why it is one of the favorite fungi available today. While it is readily available today, mass consumption can get rather expensive.

This is especially true when you buy commercially. Combine this with the fact that there is so much misconstrued growing information out there, and it only makes the potential grow all that more potentially difficult.

That is exactly why this guide was developed. It’ll cover everything from the preparation of the substrate to fruiting and harvesting the final product.

How To Grow Lion’s Mane 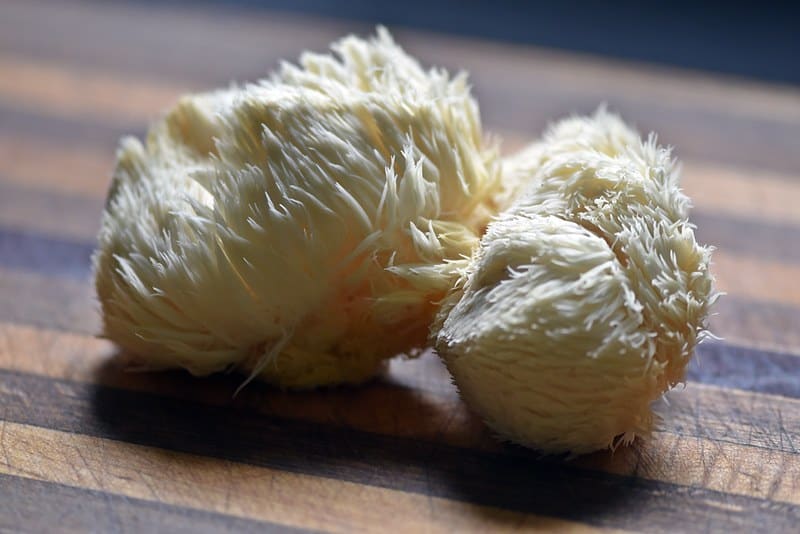 In this guide, you’ll be growing a 12.5-kilogram fruiting block. The substrate should weigh a total of 2.3 kilograms plus the extra 200 grams of grain spawn. Other than that, you are going to need:

Getting The Substrate Ready

You’re obviously going to be growing with a master’s mixed substrate because it is highly nutritious. Despite its nutritional value, it is more prone to contamination, and this is why it must be properly sterilized.

Most substrates are inoculated using what is known as the aseptic technique. When using the quantities mentioned above, you’ll be able to produce a 2.3 kg bag, which will be inoculated with 200 grams of grain spawn.

If you wanted, you could half this quantity and use two separate of 12 x 13 cm grow bags.

You’ll want to begin by weighing out your components and placing them in your grow bag or bags, depending on the method that you choose. You’ll either have one big bag or two smaller bags.

When shaken well enough the next step will be to add the water.

As was mentioned above, the master’s mix is extremely nutritious and this is why it was chosen for this project, but it also highly prone to contamination. This is why sterilization is such a crucial step and it will be the next one on the list.

What you will want to do is pack the folded grow bag or grow bags into your pressure cooker, add water, and sterilize for 90 minutes at right around 15 PSI. As far as sterilization goes, the process doesn’t get much simpler than that.

After you’ve sterilized for 90 minutes it’ll be just as important to let the entire pressure cooker cool down before moving on. Don’t get too excited, jump in there, and start removing components.

You don’t even want to crack the lid open until the mixture has had adequate time to cool. This is because any major drastic changes in temperature could cause the bags to burst. This is obviously something that you’ll want to avoid.

The next step in the process is inoculation. This is something that will be done with grain spawn. One thing to keep in mind during this process is that your newly created fruited block will have no microbiome.

What does this mean? Unfortunately, it means that even though sterilized above, it will still be more vulnerable than ever to contamination. In addition to this, is has already been heavily supplemented, and it is for both of these reasons that most experts would recommend inoculating the fruiting block using what is also known as the aseptic technique.

You’ll find tons of information about this process online as well as videos and pics, but it basically entails doing everything that you possibly can to avoid any contamination.

This will include wearing the right gear, working in an area with minimal airflow, and utilizing a standard 10% spawn rate. The higher the spawn rates, the faster the colonization, which greatly lowers the overall risk of contamination.

Once the inoculation process is complete, you’ll want to immediately seal the grow bag. This is obviously to reduce the chances of contamination. If you don’t have access to an impulse sealer, you can use a common zip-tie.

When closed off, you’ll want to go ahead and shake the bag to thoroughly and evenly distribute the grain spawn.

You are well on your way and most of the hard work is done. All the mixing, shaking, and measure is pretty much over. There is nothing but waiting left and that’s exactly what you’ll be doing in this step.

However, you will want to make sure that you store the fruiting block or blocks in idea conditions. Luckily, the ideal conditions are room temperature, which makes things a lot easier. Storing at these conditions for 14 to 21 days will allow the block to colonize and for primordia.

After you notice the primordia forming, you’ll be ready to provide fresh air. Keep in mind that by this point, the fruiting block should feel firm as well. As the mushrooms grow, they’ll need and seek fresh air.

When you eliminate the air in the bag and let in fresh air from the outside, you’ll encourage the mushroom to grow towards the fresh air opening. This will be an attempt to create large, healthy caps.

You’ll want to make your incision in the bag where the mycelium appears to be growing the thickets.

You are now in the fruiting stages and this means optimizing the environment for optimal fruiting growth. For some people, this might be a mini-greenhouse. For some individuals, it might mean a large plastic crate.

Whatever the situation is, you are looking for a humid-micro climate. When limited on space your best option might be making a shotgun fruiting chamber. This can be accomplished using a plastic crate and perlite.

Make sure that you are misting the walls of the greenhouse or housing environment twice daily to increase the overall humidity. At any time if the mushrooms look long and leggy, you’ll want to increase the amount of airflow, as to avoid this.

If you notice yellow tints on the mushrooms during this stage it is likely that it could mean not enough humidity.

Most people base their harvesting on the texture of the mushroom. That’s right, the Lion’s Mane can be harvested at different maturity times. Some people like more of a textured surface, which can act as a meat-substitute when cooking.

Just keep in mind that Lion’s Mane is a somewhat slow species, as it can take anywhere from two to three weeks for the mixture to perform a fruiting body. All that aside, many people like cooking the Lion’s Mane as steaks, in soups, or even battered and fried. Whatever you choose, you likely won’t be disappointed.