As a purveyor of mushrooms, I can certainly tell you that it helped me immensely to learn about their unique life cycle. It helped me in many ways and although I still don’t know everything, I know far more now than I did.

And, as my obsession grows, this basic knowledge of the life cycle only help center me. First, taking the time to learn about the life cycle will familiarize you with the terminology.

There is a lot of it and half of it you won’t be able to pronounce without a voice program, but it’ll be pertinent to understand what it is.

Despite the growth of my now vast terminology, it was the appreciation for nature’s design of the mushroom that hit hardest for me. The mushroom truly is one with nature and seems to be connected to everything around it.

Truly fascinating stuff that you’ll have a chance to learn all about as well if you are willing to stick around and take the time. 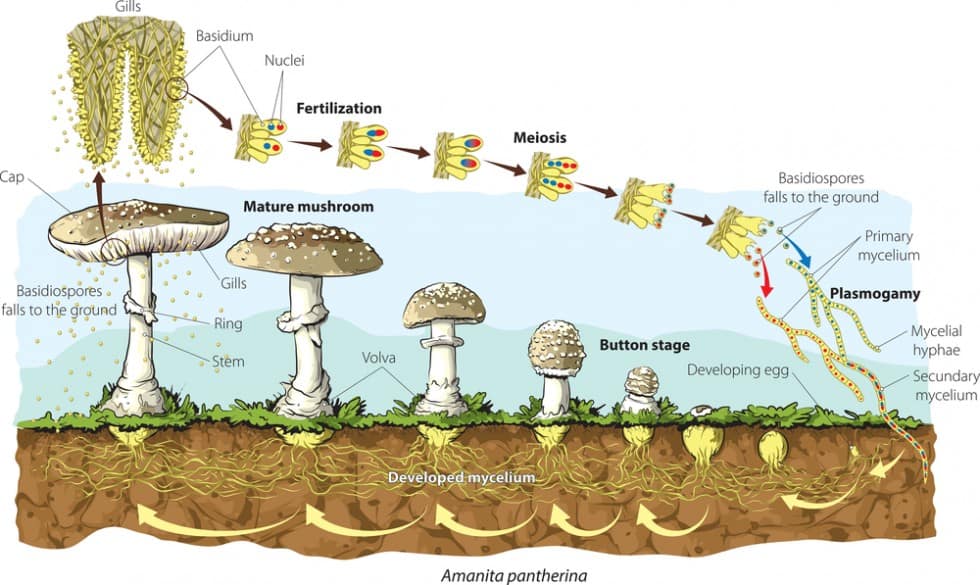 Many people know that a tree produces fruit and seeds. However, they don’t know that these seeds are specifically for reproduction. Well, the mushroom is designed in a much similar manner.

Yes, Fungi and mushrooms are completely different things, and if you aren’t aware of this, you might want to start there. Go back and do a little more research on the distinction between fungi and mushrooms.

Once you have an understanding of this, you’ll be ready to learn more about the life cycle of the mushroom.

Okay, so the spore is pretty much the reproductive unit of the fungi. It is usually microscopic in size and single-celled, but not always. Just most of the time! As you learned above, it plays a similar role as the seed plays to the flowering tree or plant. Simple enough, right?

Things get a little more complicated when it comes to the actual reproduction process. Mushrooms have a variety of manners in which they can release these spores to kick off the reproduction.

Combine this with the fact that spores are just as varied in size and shape as mushrooms are, and you are truly looking at a vast community of mushrooms and spores.

There are two distinct subdivisions of fungi that can determine the style of structure that produces and releases spores. These two structures would be the Basidiomycetes and Ascomycetes.

First, imagine a typical gilled mushroom with a traditional stem and cap. Go look one up if you are unfamiliar, as a pic will come in handy. Now, locate the club-shaped structures of the plant.

These components are called basidium, and it is right on the outside of the small tips of the end of the basidium that the spores will appear. There are typically four produced at the end of each basidium. These spores are commonly referred to as basidiospores.

The Other Reproductive Ascomycetes

Believe it or not, Ascomycetes make up nearly 75 percent of most fungi, and they can be found on everything from cap fungi to morels, and even truffles. These spores are actually produced on the inside of a long, sac-looking structure.

Both the Basidiomycetes and Ascomycetes are different in appearance, but they both serve the same purpose. This purpose is to produce and project spores, as to make more mushrooms grow in the general vicinity.

The Release And Role Of Spores

That being said, a single mushroom can release thousands upon thousands of spores. It has even been said that there are one particular species out there that is capable of releasing over 30 billion spores in a single day. Now, those are numbers!

What’s even more interesting is that most of these spores can jump right into the reproduction process after being released. Not all, but the biggest portion of them can. There are those, however, that will have a specific process that they must undergo before they can germinate.

In fact, there are many processes that specific spores will have to go through before they can start reproducing. The only problem is that some of these processes aren’t even fully understood yet. Trying to explain a lot of them would be mind-numbing and probably impossible to do.

This is why for this article’s sake, we are only going to cover the sexual reproduction process that a mushroom must go through.

When a spore germinates it will create a threadlike structure commonly referred to as a hypha. This hypha, given the adequate amount of time, will grow out branches. The main goal and purpose of these branches are to connect to a compatible hypha from another spore.

When we talk about compatible this doesn’t necessarily mean male and female, as there are no male and female structures. It is more like mating types, which are commonly referred to as negative, plus, or minus.

Then two pluses or two negatives meet, they exchange genetic information. This information allows them to begin the reproductive process and they’ll eventually begin to branch out and create a network known as mycelium. 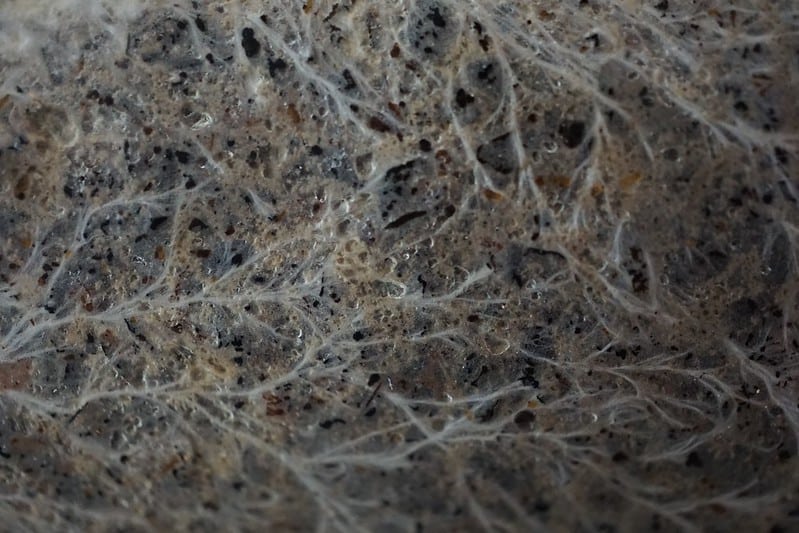 Okay, just to reiterate a bit, the hypha or plural hyphae are the threadlike fungi that connect together and make up the fungal body know as mycelium. Mycelium is a complex network similar to that of a root system from a tree or plant.

It grows underground where chemical and nutrient exchanges commonly take place. The mycelium network truly is vast and can grow much further and wider than one would imagine. This is what begins the mushroom-growing process.

When the temperatures, moisture, and nutritional factors are lined up, the mycelium will grow upward toward the earth to create the mushroom.  As it grows upwards, it’ll tightly twist, twirl, and spin itself, eventually creating what is known as the hyphal knot.

This is pretty much a little knot or spherical-like structure that resembles the head of a mushroom. When this hyphal knot is in the very developmental stages it’ll resemble that of a baby mushroom, and this structure is sometimes referred to as a primordium.

When you are able to see the primordium poking above the ground, you will have what is known as the earliest developmental stages of the mushroom. This structure will only continue to grow and develop until it fully forms an adult mushroom.

However, like most things in life, it isn’t all that cut and dry. During this developmental stage, the baby mushroom can either develop into a predeterminate or an indeterminate.

There are some distinctive differences between the two. And, these differences can determine how the mushrooms develop. For instance, the predeterminate mushrooms will develop their stems, caps, and gills during the very early stages of life.

As you’ve probably already guessed the indeterminate is completely different, as its shape will not be determined until later in its life. This type of mushroom can be truly shaped based on its surrounding environment.

These types of mushrooms face far more obstacles and challenges when maturing as opposed to counterparts. For instance, it is not uncommon for a twig or branch to get in the way and grow around the mushroom.

Luckily, when this does happen, it doesn’t cause a whole lot of damage or disfigurement. In fact, this mushroom will likely recover without any defects.

After The Release Of The Spores

So, this is pretty much the life of a mushroom. You know that it’ll spread its spores as to develop new mushrooms, but what happens to the old mushroom left behind? The one that originally spread the spores?

If it hasn’t already been collected by a farmer or hunter, bugs will likely come along and feast on it until it is no longer recognizable. The spores will continue to germinate and create the mycelium network that will grow around the dead or decaying mushroom.

It will retreat back into the dirt and debris where it can safely hide out of view all the while continuing to spread its life and create new mushrooms.

You just got a lot of terminologies and a whole life cycle of a mushroom thrown at you. You are likely a little confused and still trying to pronounce some of these terms, but it really is all very simple when you look at it.

Spores germinate to hyphae, hyphae connect and form the mycelium. The mycelium creates a network or root system that ends up causing a primordium to form above ground. From here, the mushroom goes from early developmental stages to maturity.